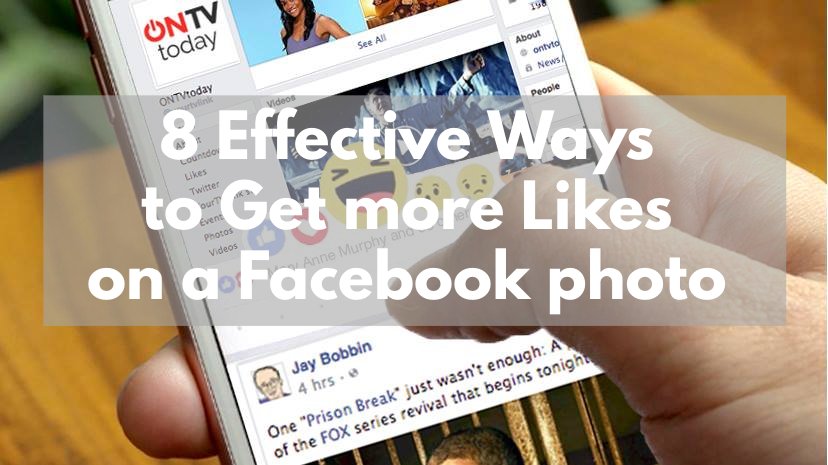 Have a sick wish to see your notifications popping non-stop? Need to satisfy your addiction for likes? Or maybe you are a reasonable person and seek to grow a personal brand, expand business or attract a larger audience on Facebook? Well, great either way because our guide has the information which will help you get precisely that. More likes.

Whether you run a meme page, personal brand, magazine or wish to build a content strategy, there are some things you can do, some techniques you can use to improve your content’s likeability. Without further ado, here are tips, tricks, techniques and know-how on how to get more likes on any Facebook photo.

1. Begin by analysing your audience

Some steps apply to all posts and work regardless of what’s your brand, how’s the product called or what audience you seek to impress. However, as with all things, these are just a teeny-tiny portion of the entire process. Most answers to your questions, regarding engagement improvement, are answered by “It depends”. A UK teenagers’ behaviour on social media is radically different from a senior citizens’ who lives in the Netherlands or a Mid-Western housewife who drives an SUV.

Your audience dictates what you should do on social media. This includes brand voice, posting schedules, etc.

Before you invest in visual fidelity or hire a social media manager, we strongly recommend that you personally get to know your Facebook audience first.

Navigate to your page’s Insights tab and select ‘People’. This is how it should look (Photo below), 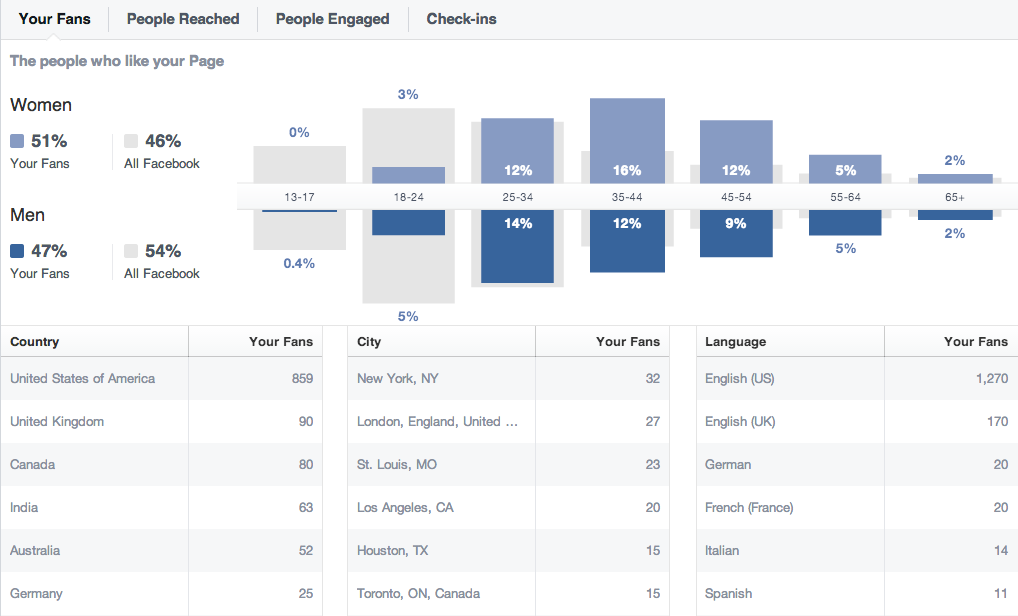 Upon opening, you will be presented with a detailed and clear-cut chart and table about your fanbase. The categorisation shows:

Some things could be already apparent, but some could be new to you. For example, maybe women make up a much larger part of your audience rather than what you anticipated. Perhaps you are based in London, but your largest fanbase is from Manchester, France or India?

Visiting the Insights -> People can be eye-opening and helps with future post optimisation as well as ad targeting.

2. Make sure the time is right

Some Facebook experts say that timing is very important for Facebook posts. Other, however, say it’s everything. In other words, you could post something that is complete and utter garbage and still get decent engagement if you do it at the right time…

And believe us when we say it isn’t far from the truth. The best times vary slightly depending on your audiences. For examples, kids are mostly active in earlier hours, teenagers – just after school and in the evening, adults – during lunch break at work and in the later evenings. Once again, you can navigate to the ‘Insights’ tab on your Facebook page and see the times when your audience seems to be most active.

From those numbers, you can crunch out their potential weekly routines to optimise and select the best times for more engagement (more likes).

The subject: a 21-year old college student with a part-time job.

Monday: is sore and suffering from a terrible hangover due to heavy partying during the weekend, scrolls FB, IG and other social networks passively. Barely makes it to lectures, where he/she consumes an energy drink or coffee to wake themselves up. Finishes up school goes to work, right before starting the shift, scrolls again for 20-40 minutes. Ends his/her shift, still feels kind of beat and scrolls on the commute back home. Watches movies while only chatting (little Facebook or IG) for the rest of the evening to get back on track.

Tuesday: gets better but… Much of the same as the day before, because they slept too little, but has more energy in the evening so that you can get reasonably decent engagement in mid-day and the evening.

Wednesday: the best day of the week for engagement. The student finally feels well and is at his or her most productive at work, uni, home and anywhere else. Weekly engagement rates are at its peak on lunch hours during Wednesdays.

Thursday: feeling fresh, but Thursdays are usually very busy for younger people. For some reasons, these days are the most common for tests at school or shopping before weekend parties. Good engagement rates available in the evening hours, though, just after work ends.

Friday – Sunday: preparing for and partying. Friday 11 AM-2 PM is great for engagement, but other times during the weekends just won’t float your boat. People are away with their families, go to the movies or do much more important things than staring at your posts… Kidding. But weekends are mostly for getaways from social media regardless.

The chart below also illustrates engagement rates by time according to SproutSocial. 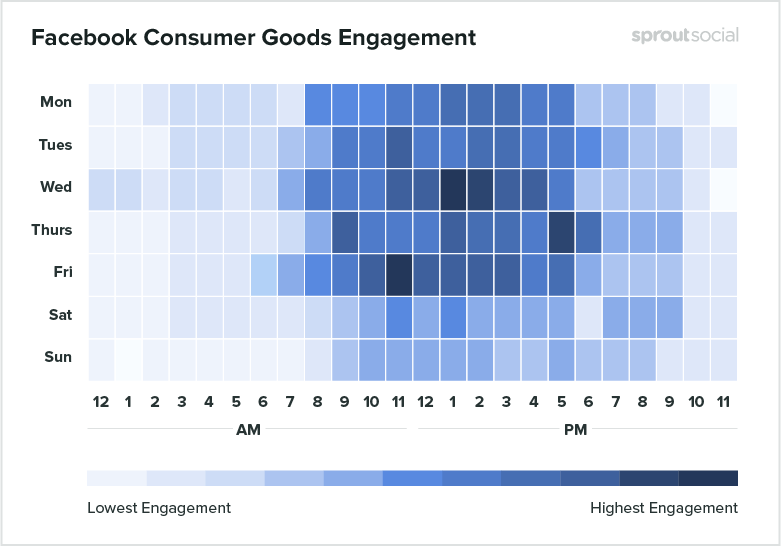 Sproutsocial posted a great article on how to run successful contests on social media and why they pay off. According to them, an efficient contest campaign (one which will also rake in more likes) has to have set goals, budget and prizes, while the organisation party must decide on contest type, monitor final results and fulfil obligations!

In general, contests on social media are the best way to generate amazing short-term engagement. Just say that in order to participate ‘They have to like the photo’. However, be advised that giveaways trigger something like an automated response from people. They either are quick to participate or scroll right past. Nonetheless, the number of engaged people and subsequently, the number of likes will increase significantly. 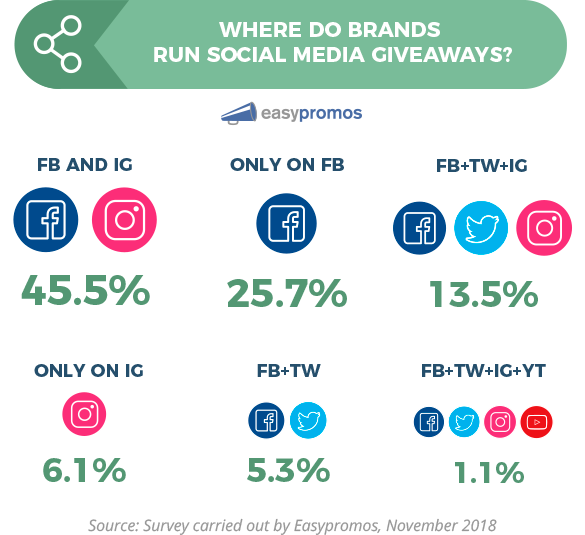 This chart by Easypromos also shows the most popular channels for running social media giveaways. IG and Facebook seem to be the clear favourites. This is kind of weird because Facebook, in by itself, has a strong presence, yet as a standalone giveaway platform, IG seems to be overlooked or used nearly as often, while pairing with Facebook is done by almost half of all the giver-awayers.

Utilise the chart to your advantage. Facebook seems like the most efficient and most-used network, which is usually paired with Insta. Twitter or YouTube could be a dark horse choice, but it seems they bring fewer benefits and are much less common.

One of the most sure-fire methods for long-term like number improvement is to create original content instead of reposting what others made.

The best evidence of this – meme pages. If you follow at least a few of them on Facebook, you will understand it very soon. If not, let us explain.

In general, memes are engaging content. However, there are only so many creators, and most meme pages only repost content made by others or submitted by fans. There are a few, nonetheless, which do original content, brand it and have tremendous success. A page like Classical Art Memes has more than 5 million page likes and accumulates well over 5-7 thousand reactions on their ‘better’ posts. 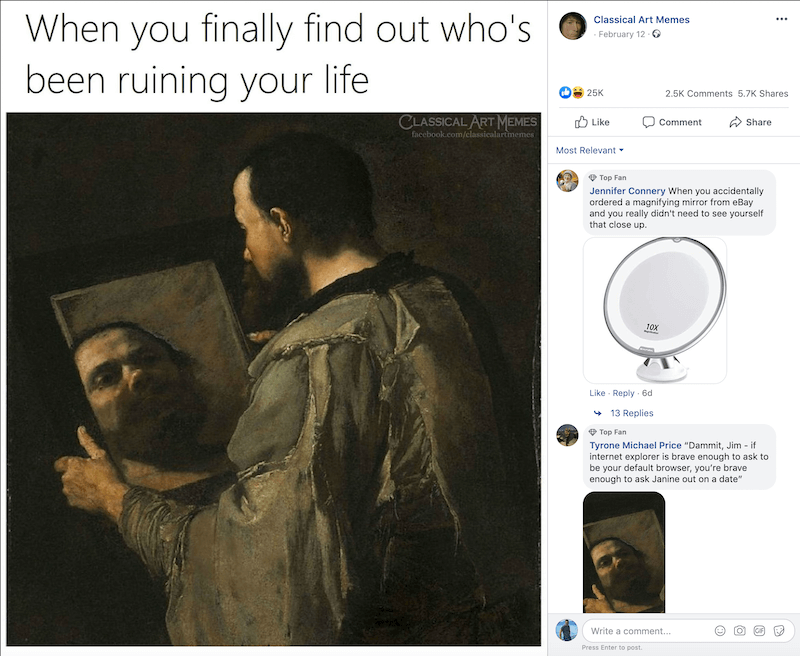 Reposting pages only bring so much value to people. They’re very niche and receive much less appreciation (likes) and are more or less limited. Why? Because most people have likely seen the reposted meme at the original source or… That’s right – reposted somewhere else. And most content isn’t that world-changing to receive likes multiple times at multiple sources. 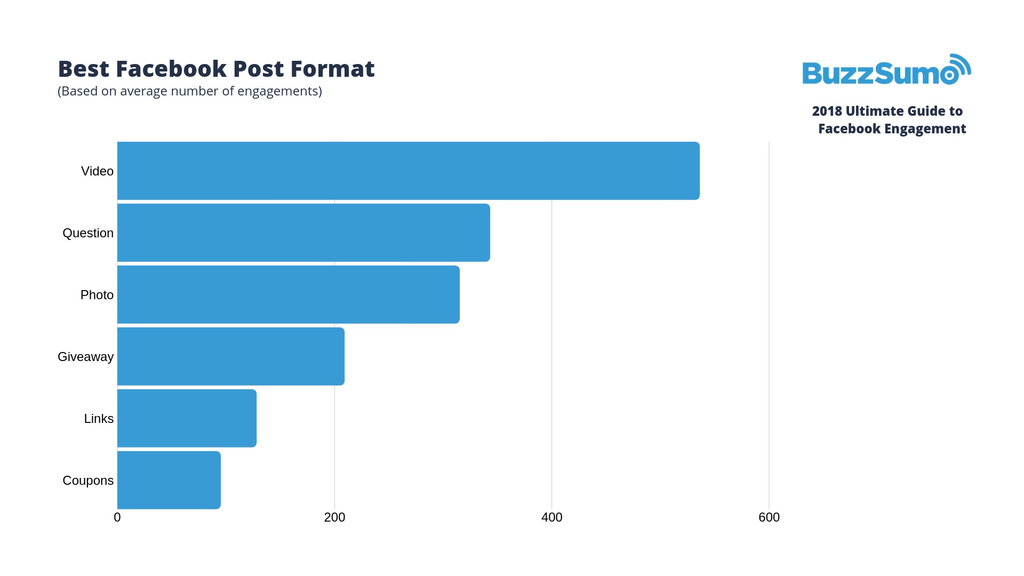 Did you know that the best-performing posts are videos and questions, and not videos and photos? Well, according to BuzzSumo, in 2018 people were mostly engaged by videos (probably thanks to thousands of cute puppies and kitties on Facebook) and question posts.

Our short advice would be to: Talk less and show more. Except if you want to ask people something.

However. People love visuals. That’s a fact. Hence investments into improving skills in photo editing or visual design or hiring a graphics designer from Fiverr, Upwork, etc. always pays off. Nonetheless, if you want the best results now, hop to template editing platforms where no skill is needed yet the end product or finished post will attract the eyes of your audience.

Social media, even though it encourages interaction and socialisation, is a paradox-filled environment. In a space where people have the freedom of speech and expression, they sometimes fear their own thoughts.

A clear example of this is sometimes avoiding to press like on a photo if you’d be the first to like it. More often than not, people avoid acknowledging their appreciation or agreement with a particular statement (post) if it’s at least one-bit controversial, shocking or new if few people have pressed like before.

This is just the same as being the first to raise your hand in a class full of unfamiliar faces, the same as approaching your crush first. This social constrict harms young pages as core audiences are not yet developed. As well as new pages that undergo rebrands or change their posting concept, much of engagement is lost somewhere along the lines. Help your audience overcome this fear and make your posts look more relevant with post likes from BuySocialMediaMarketing.

Starting at just 2.99$ for 100 likes, any page owner, social media manager or project creator can boost organic interest in their page.

BuySocialMediaMarketing works globally and without needing sensitive account information. Order the product now and receive the likes within an hour. It’s quick, cheap and efficient in boosting likes.

BuzzSumo says to keep captions under 50 characters, Buffer states that 40 characters is an optimal amount and most other platforms and experts strongly suggest not letting your captions expand to more than 8-10 words.

The driving factors behind this strive for caption shortening are two: a tremendously passive nature of people scrolling through Facebook, vast amounts of information, tons of new content as well as ever-shorter attention spans of the users.

If you can clam the whole meaning (summarise) of your video, article, update, photo into a few words, people are more likely to engage. Summarise even if you love to ramble. It helps, and people will click to find out more about what’s so worth rambling about.

And yes, this is learning to clickbait 101, but what are you going to do?…

Social media is business, and since you want more engagement, sometimes the necessary step is to mildly exploit people’s curiosity and urge to know something about someone or something.

Finally, we strongly insist on interacting with your audience in the comment section. No one is too big to be down to earth and thank people for their compliments or appreciate their insightful comments. Just check out how caring and friendly BMW, a 100 billion USD company, seems with regular people.

Their social media is heavily driven towards the engagement of fans, even if they never-ever owned a BMW or aren’t likely to buy a new BMW straight from the dealership worth 40 or 140 thousand dollars. This is a prime example of how a prestigious and successful business should handle social media and boost engagement as well as likes.

Besides, the comment section could be not just ‘Thank yous’ and ‘Amazings’ thrown left and right. If your brand voice is different, you could post witty comments, encourage banter and be constantly going back and forth with your audience members. Yes, it can be time-consuming, but getting likes takes money or time (or both, actually).

CAUTION: if you are not an insult comic or rely on sales, always take the PR-approved route and hold back from arguing or fighting. Even if comments insult or harass you, ignore them or if a person was mistreated at your café, their shoes ripped after purchasing or your memes insulted them, acknowledge their grief. Seem professional, mature and respectful, regardless of what they seem to you.

It goes a long way and creates positive audiences which will respect your communication and like more posts. 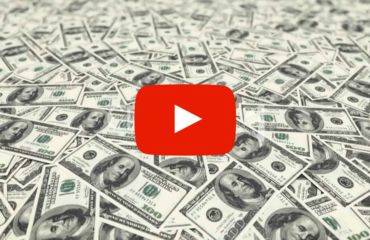 How many subscribers do you need to make money on youtube? 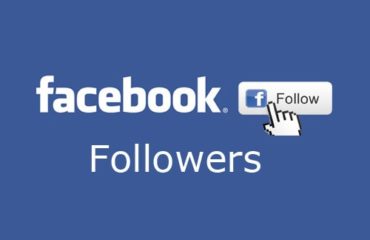 How to see how many followers do I have on Facebook? 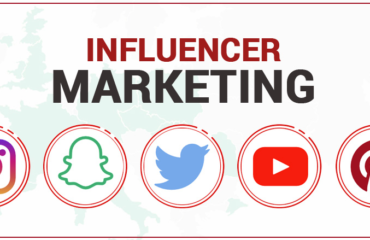 How to measure the ROI of Influencer Marketing in 2019